A globe to inspire a love of travel and the stars 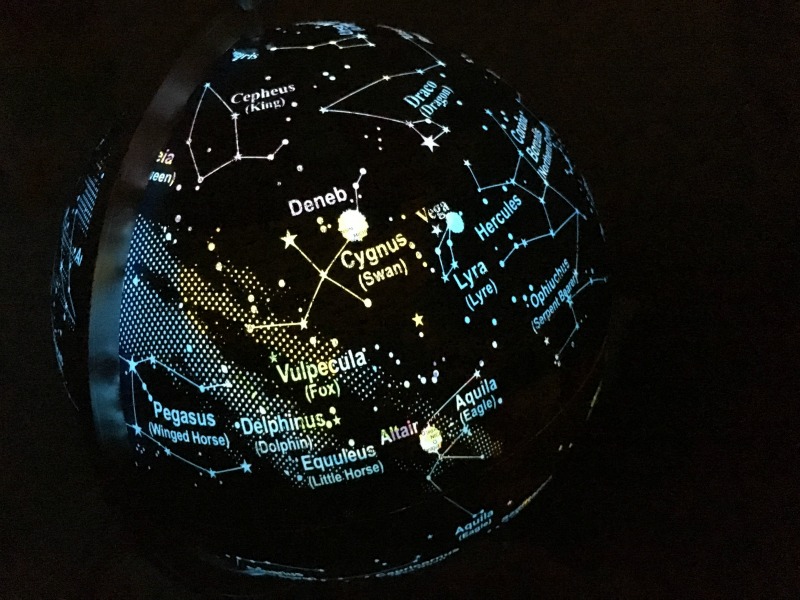 The Bug is a fan of the stars. He has glow stars stuck to his ceiling, a room totally devoted to Star Wars, and he’s constantly on the lookout for a falling star, now that the nights are getting longer. Whenever we’re out at night, especially on a camping trip, he spends hours browsing the Skywalk app, trying to figure out what he’s looking at in the night sky. It’s a lovely thing to love, I think. But when you marry that interest with a love of travelling, and understanding the world, you’ve really got a recipe for inspiring a young mind.

We were recently sent the 2-in-1 Earth and Constellations Globe from Brainstorm Toys. During the day it’s everything you’d expect of a globe: clear boundaries of the countries of the world, major natural features and capital cities, and the latitude and longitude lines he’ll need to know about when he gets further up the geography education ladder. But when darkness falls, it’s a whole other world (pun intended).

As he switched on the light I wished I’d put him to bed earlier – I could tell we were going to have a long discussion. The globe shows all the major constellations, with their Latin names and nicknames, and it wasn’t long before he wanted to open the curtains and see where we were on the star map that evening.

What’s especially lovely about this globe is that it inspires an interest in the world he lives in day and night. Once he’d examined all the constellations, he switched the light back on, so that we could identify our next travel project. We’ll be in Jamaica soon, and as a lover of the Caribbean, my boy wanted to place himself so he could start looking forward to his holiday. He figured out how far it was from our last long-haul flight destination, Barbados, and compared the sizes of the islands. There then followed a discussion about why there is a North, and a South America, but not an East or West. We talked about some of the countries of South America, and which might be safest to visit as a family, and which have the most impressive landmarks.

I can see that this globe is going to provide hours of inspiration for us all, and it’s a very easy way to learn and share our knowledge of the world we’ve travelled, and the places we’d like to visit. Coupled with our Lonely Planet Kids travel book, it’s going to fuel a love of discovering the world, and isn’t that the best way to learn? I’ll just have to start the bedtime routine a bit earlier in future!

We were given the Earth and Constellations globe for the purposes of this review. All images and words are our own. Brainstorm also have the brilliant Earth by Day Earth by Night globe, which is being given away over on Space In Your Case.