Can McVite’s Breakfast Biscuits keep you going all morning?

We’re big breakfast fans in our house. If M&D stay in bed too long, I will eventually make my own breakfast, spraying Rice Krispies liberally around the kitchen to make the point that they really should get up earlier. They can be heard audibly crunching their way round the kitchen as they attempt to hold back square-words.

Mummy, on the other hand often contributes to the almost 4 billion breakfasts eaten on the go every year; she will often snack on cereal bars and fruit all morning. But she had never previously tried the various Breakfast Biscuits on the market, thinking that biscuits for breakfast was just the start of a slippery slope towards cake for lunch and fudge for dinner.

Can McVitie’s Breakfast Biscuits keep you going all morning?
So yesterday she set up clinical experiment.* Whilst she laid in bed for an extra 20 minutes, me and the Bug faffed around reading random books, skiving our music practice, and generally irritating each other. Our demands for breakfast were met with a “Don’t worry, it’s all part of the biscuit experiment,” followed by another snore.

Extra sleep and time for TV?
When she finally surfaced we were given some raspberries and a packet of McVite’s Breakfast Biscuits each, and allowed to watch TV. We were so thrilled to have time for TV before school that we forgot to eat anything. This resulted in the usual freaked-out parenting style which takes place at 8.29am every morning by our front door.

“Get your bags ready! Get your coats on! Where’s your violin? What about your homework? No, not those shoes, wellies! Where are your wellies? What do you mean you left them at school? OMG you haven’t even eaten your breakfast! Do I have to do EVERYTHING for you???!”

And they’re good for you!
Lucky then, that we were able to eat breakfast on our walk to school! Clutching a packet of breakfast biscuits each, we chomped our way to school and totally forgot to complain about the uphill walk! They were actually yummy, and as Mummy explained to the playground massif, they do constitute a healthy breakfast. I’m a porridge fan, so you can imagine my joy at learning that these biscuits are made with wholegrain porridge oats. Known to have slow release energy to help sustain you through until lunchtime, they are fortified with vitamins D, B, Iron and fibre, so it didn’t even matter that Mummy forgot our vitamins!

Low in fat and calories too.
Did they keep us going until lunch? We were happy to report that they did. Mummy, for her part, did her usual thing of snacking through the morning, using these biscuits instead of her usual cereal bar. She was happy to find they contained only 229 calories per pack, so they were easily added to her My Fitness Pal app.

Daddy’s verdict:
Daddy is a proper, sit down and eat breakfast fan. King of muffin-making, he has been known to set his alarm half an hour earlier than necessary even for a 2am ski resort flight! He loves his breakfast. He has recently started a new job, and has taken to setting off at the crack of dawn to “miss the traffic.” The fact that his journey involves the M25 rather controverts this hopeful effort, but he is insistent. Mummy is equally insistent that no showering or any other activity involving noise (like the clattering of spoon in dish) is permissible before 6.45am. So he was duly dispatched with a pack of McVite’s Breakfast Biscuits yesterday with the instruction to tweet feedback, and close the door quietly… 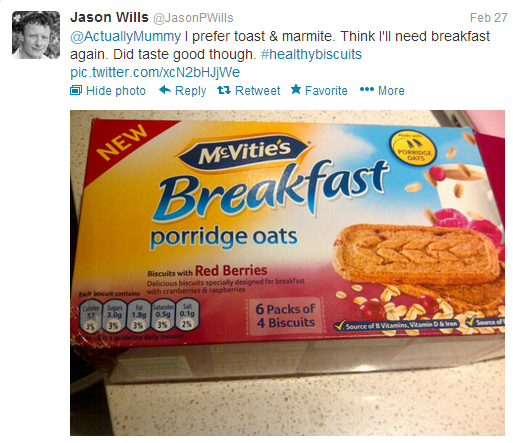 I have this to say to Daddy: “Perhaps if you slept in a bit longer one breakfast would be enough!” On the upside, he was retweeted by the @MarmiteBot! For my own part, I would like to see the Oat & Honey and Apple variety turning up as a post-school snack so I can still have my porridge and maple syrup in the mornings. Mummy is a total convert though and will be found eating Sultana and Cinnamon biscuits on the school-run most days from now on.

20 facts you need to know about head lice

6 thoughts on “Can McVite’s Breakfast Biscuits keep you going all morning?”