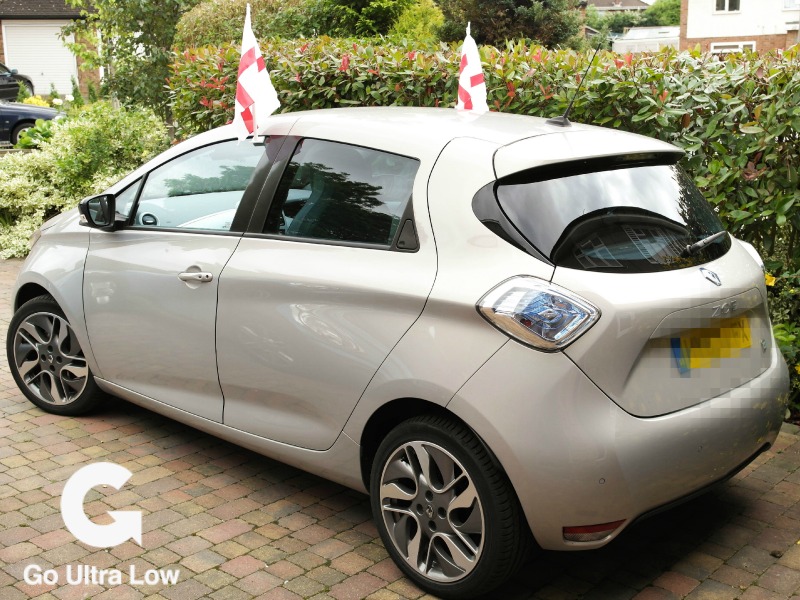 Over the last 5 weeks we’ve been road-testing an electric car. You know, those cars that you’ve seen on the news occasionally, read a bit about  and wondered, but always thought were a bit of a non-starter? Yeah, me too. But we agreed to take temporary ownership of a 100% electric Renault Zoë to really understand the deal. And do you know what? We were massively surprised by how much we liked it! Here’s what we learned:

The first thing that freaked me out about an electric car was how quiet it is. I was out when it arrived, doing a late school run, and it took me a while to get out there to explore. As I opened the door – left unlocked by the blokes in charge *insert eyeroll* – a little bleep set up. Said blokes had also left the engine switched on! It was totally silent!

That’s just weird, I thought, putting it into drive, and expecting it to go like a milk float. It was a really good job I had my foot near the brake or I’d have been in our neighbour’s front garden before I could yell greased lightning. As Actually Daddy said, it is so like a normal car. Then he went all bloke on me and quoted an Autoexpress review, agreeing with this:

It can manage 0-62mph in 13.5 seconds. But because the Zoe’s torque is available from zero rpm (like all electric cars), it actually feels quicker than the figures suggest. And it’s not only around town that the Zoe feels perky – even at motorway speeds, it doesn’t struggle to keep up with other traffic, and it’s far more responsive than you’d imagine. It has a claimed top speed of 84mph…

… which he claims he can’t corroborate 😉

Suffice to say it is quick off the mark.

Then there are gadgets! I once went with my husband to a car showroom, to talk about possibly buying a new car. It was to be my car, paid for by my company, nothing to do with Jason. The salesman directed a lot of talk about alloy wheels and engine spec to my husband, before I gently pointed out that alloy wheels leave me cold – colour, trim and drinks holders are what do it for me. So you can imagine my pleasure at the dashboard – the latest TomTom satnav, bluetooth, apps to download. It even shows an up to date list of your closest public chargepoints, and whether or not they’re in use! 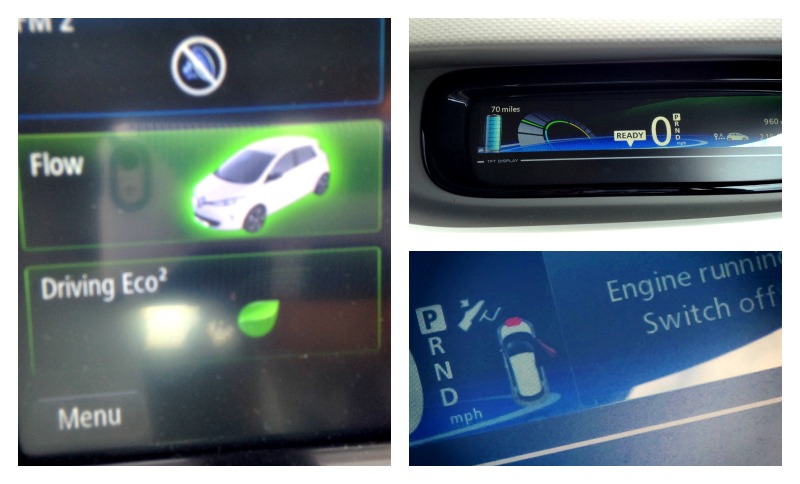 I pretty quickly figured out that Driving Eco meant staying in the green zone; blue not so good, yellow = bad. It became a competition for me to see how far I could bring down the naughty figure after he who likes his speed and his brakes had paid it no respect on the motorway. Oh, and if you ever charge your car and forget to close the plug socket cover, you will very quickly notice that you are driving Rudolph 🙂 (I took these pictures as a passenger, by the way)!

The cost of driving an electric car

My Mini Cooper costs around £45 to fill up with unleaded petrol, and the dashboard tells me I get around 300 miles out of that. That’s £0.15 per mile. Whilst lasts me a good week of running the kids around to their various clubs and getting me to the station or to local meetings, if I need to go further – a trip to Grandma’s, say – I’m filling up on the way home. The Renault Zoë costs around £3 to charge on an overnight rate at home, and as a 100% electric car, it costs as little as £0.02 per mile to run.

In addition to the savings on running costs, Go Ultra Low cars are exempt from road tax, and from the London congestion charge. So you’re pretty soon racking up savings. Plus, the Government Plug-in Grant gives you 25% off the purchase price of an electric car to a maximum of £5,000, so there are plenty of cost incentives to getting in on electric vehicle ownership sooner rather than later.

Running out of petrol is a scary thought, and running out of charge has been on our minds whenever we haven’t had a sure fire plan for recharging. But with a little bit of planning we found it was easy to top up our charge while we were out, so that we always had enough to get us home. For starters, the average car journey is 7 miles; our Renault Zoë had a range of 75 miles so unless we were out for the whole day driving, charging on the go wasn’t an issue. Jason often took our Zoë to work at Thorpe Park, a 35 mile trip; he simply hooked it up to the public chargepoint there, and it was ready for his drive home at the end of the day. And if you do need to charge an electric car while you’re on a journey, you’re not short of options.

There are 5000 public charge points across the UK, and by 2015 we’ll have the best rapid charger network in Europe. Here’s how they all work:

How charging an electric car works.

Depending on where you drive, you can sign up at a nominal cost to your local charge point network operator, and use all their charge points at no extra cost. Or in many cases, chargepoints can be used with a pay-as-you-go option, so you’ll never be stranded. Most chargepoints have two different charge capacities, so you can use the fast or standard charge – they use either 7 or 3 pin cables, so I’d recommend getting both for your car in case one side of the chargepoint isn’t working for some reason (we only had the 7 pin and were unable to charge once or twice, but with both cables we’d have been fine).

What about the upfront cost?

One of the reasons an electric car costs more to buy initially than a standard car, is the cost of the battery. But it is possible to hire the battery for the time that you own the car, rather than purchasing it outright. Renault’s battery hire scheme means that your upfront car cost is reduced, and you pay a set amount per year for the battery, dependent on your mileage. One of the benefits of this is an insurance policy; if the battery performance deteriorates, Renault will replace it for you, and on top of that, you’ll get roadside assistance should you ever have battery problems on the move. Phew!

Would we buy an electric car? I have to say, I’m seriously considering it for when the lease on my current car is up. Here are some price comparisons so you can see how the cost of an electric car compares to that of a standard petrol or diesel car. To find out more about charging on the move, or buying an electric car, visit Go Ultra Low.

We were loaned our #GoUltraLow electric car for 5 weeks for the purposes of review. We thoroughlly enjoyed driving it. All opinioins and editorial copy are our own.

How to park for nothing on a London day trip

46 thoughts on “The practicalities of driving an electric car”