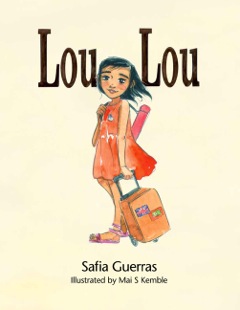 Well, a film reviewer, and now a journalist. What wonderful opportunities I get to have a go at new things, just by dint of Mummy having a blog! Does it matter that I rarely win anything significant for my efforts? Not a jot! I get to do stuff that most children would give up their Haribo for, in a safe environment, with Mummy’s support and help.

So, I may not be Odeon’s official junior film reviewer. So what? I had great fun giving it a go and playing with video editing! And today, I may not be launching a career in literary journalism, but hey, a real author, with a published book, chose me to interview her! That’s pretty cool for a 7 year old, in anyone’s book!

Lou Lou is a little girl native to the Maldives. I know about those because M&D never stop going on about their awesome holiday there, or the sad fact that some of the islands are due to become submerged under water in the next few years due to climate change. Safia Guerras made that discovery for herself when she visited and befriended Lou Lou, a child who has had to relocate from one of the most beautiful spots on earth. The thought that me and the Bug may never get the chance to visit these beautiful islands before they are gone, is quite humbling.

In a story of sadness and self-discovery, Lou Lou voyages away from home, and learns on her travels that the true meaning of home isn’t about bricks, but about people, and family who are there to support you in new beginnings. Beautifully illustrated by Mai Kemble, the book educates children about environmental concerns through lovely storytelling. I read it, and here are the answers to the questions I had:

An interview with Safia Guerras

1. How long did it take you to write the book?
The process began in 2008, when the idea to write an environmentally conscious book was planted in my mind. That idea soon grew as I got to know Lou Lou more and more and I realised that she was to be the main character of my children’s book. After that, everything seemed to happen rather fast and all of the elements of the story came together.

2. Why did you choose the Maldives as a setting for the story, as opposed to any other of the locations you have visited?
My children and I were captivated by the island but distressed to find out that they were catastrophically affected by climate change. This was the initial reason why I decided to begin Lou Lou’s story there. Not only was there educational value in setting the first story in the Maldives, a crucial aspect to any children’s book, but the rich colours of the island meant that the book could be beautifully illustrated. I think Mai Kemble, the illustrator, did a great job and really captured the essence of the island. Basically, the Maldives embraced all the elements that I was looking for to captivate my readers.

3. What was the most exciting place you’ve been to?
I’m very fortunate to have been able to travel around the world and each country I’ve visited has been exciting and unique. However, Botswana in Africa took my breath away. The desert scenery was stunning and the wildlife was extraordinary to see up close – if not a bit scary at times! The people were warm and welcoming and I would love to go back.

4. What was your first draft like?
My first draft was rough, but I knew exactly where the story was going. English is my third language so I worked with a proofreader. I think it is necessary for all authors, even those who are writing in their first language, to continue to edit and produce several drafts to ensure their best work shines through. The ability to work hard is such an important quality in anyone, not just authors, and in order to meet your potential you need to put in the effort!

5. Did you change the story after your first draft? Why did you choose this style of writing?
After developing the idea and story, I did not change much at all (perhaps a few small details here and there). I didn’t choose the story, characters or style of writing – they chose me! As an upcoming author, I wanted to focus more on expanding the character of Lou Lou and finding my voice as a writer rather than any specific style.

Many thanks for the great interview. You would make a fantastic journalist!
Warm regards, Safia Guerras
(Yes, a real live author said this to me!)

So what next, I wonder? Will I be given the opportunity to actually design a dress for Stella McCartney? Hmmm? 😉

* We were sent a free PDF copy of Lou Lou for the purposes of review and interview. No payment was received and all opinions are our own.

Brands take note: Online, customer service is all that matters