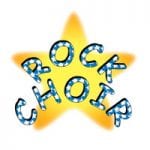 Mummy belongs to Rock Choir, a no-audition, no-questions-asked singing (and a bit of dancing!) group. She joined after Christmas, thinking it would be a fun release from ‘being a Mum’, with maybe a couple of small local concerts occasionally. Fast-forward 4 months and she becomes one of a 7,500-strong group performing yesterday at Wembley Arena. Now I’ve had my moments in the spotlight, but that’s what I call Diva status! 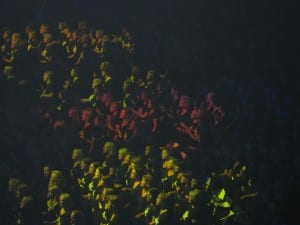 I’ve wanted to see Miley Cyrus in concert for many months now, but with M&D not splashing the cash for tickets, I was happy to settle for this as my first Arena gig. OMG! (that’s Gosh, obviously). It was incredible!

Quite aside from the totally fab and funky dance moves (which Mummy insists she nailed, although I’m sure I spotted her neighbouring soprano limping home after the event) the sound produced by this massive ensemble was overwhelming. No wonder they finished the show with confirmation from the Guinness Book of World Records that Rock Choir is now the UK’s biggest hit music act!

Defining moments were many, but the most emotional came as every singer and audience member – 10,000 people in total – held up a poster of one of several young people currently missing, and whose families are being supported by the charity Missing People.* A packed Wembley Arena (including the children) stood in complete silence as the posters were filmed; the struggle to hold back tears was tangible.

Having been party to most of Mummy’s at home practice sessions (she rehearses lines whilst she does the ironing) I have an indelible imprint in my head of her lyrics to ‘Valerie’; if I’ve heard one set of ‘doo, doo doo doo doo’ I must have heard at least a million! So I added my own miniature sound to most of the acts. However, two noteworthy performances took me by surprise. First, all the men of Rock Choir (and they are vastly outnumbered) gave a secretly-rehearsed rendition of ‘Pretty Woman’, to the fascination and squeals of thousands of ‘women of a certain age’ ;). I rolled my eyes as I pictured Mummy’s delighted reaction – although I couldn’t see her, I’m quite certain she was unable to conduct herself respectably during that one.

The other people that captured my interest specifically, were the teenage choir and the juniors. Who knew it was possible to sing at Wembley at the age of 6? I mean, come on Mummy, why haven’t I been signed up for this deal yet? And then there was the amazing Rock Choir soloist, Rachel O’Brien who sang stunningly with the teenagers. I want to be her when I grow up; her or Stella McCartney.

As I celebrated in the fountains outside Wembley Arena (knowing full well that Daddy would be in trouble for that when Mummy got home) I mentally planned my comeback gig. When I am bigger than Miley Cyrus, I want Rock Choir to be my backing singers. Hello Wembley!

PS – Mummy challenges you to listen to 7,500 voices sing ‘Something Inside So Strong’ here without shedding tears! http://youtu.be/3slYiffneMU?t=30s