The day they stayed off school: Somerset Yurts review 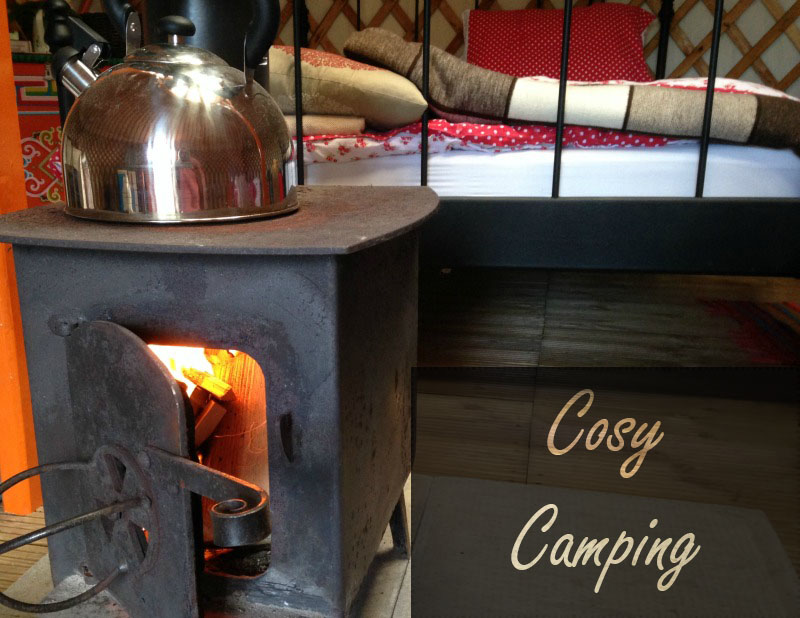 Last Monday I did something I’d never done before. Just as all the children were lining up for registration, I called the school:

Erm, the kids won’t be in school today… No, no they’re not ill, it’s just that, erm, well, you see, we’ve been away for the weekend, and, well, we haven’t come home yet…

The day they stayed off school: Somerset Yurts review

Somerset Yurts – it’s camping kids, but not as we know it!

We’d arrived late Friday evening at Somerset Yurts, after the usual rush-hour chaos, and it was raining. Now, we’re reasonably seasoned campers, but no-one likes unpacking camping gear in the rain. Which was why the yurt was the perfect set-up. Straight out of the car and into our gorgeous Mongolian yurt, complete with beds, bedding, and a woodburning stove to make us nice and toasty and we were all set. A fully equipped kitchen on site saw me reheating the curry I’d brought for our first meal, and not long after we were snuggled up in comfy beds, drifting off to the light drumming of the rain and the crackle of logs in the stove. Bliss! 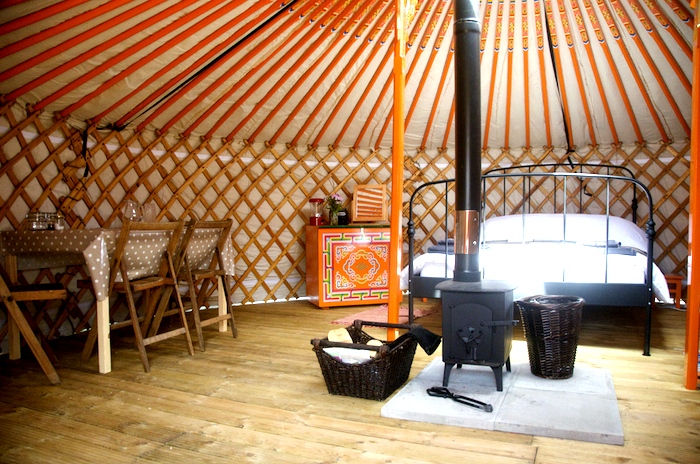 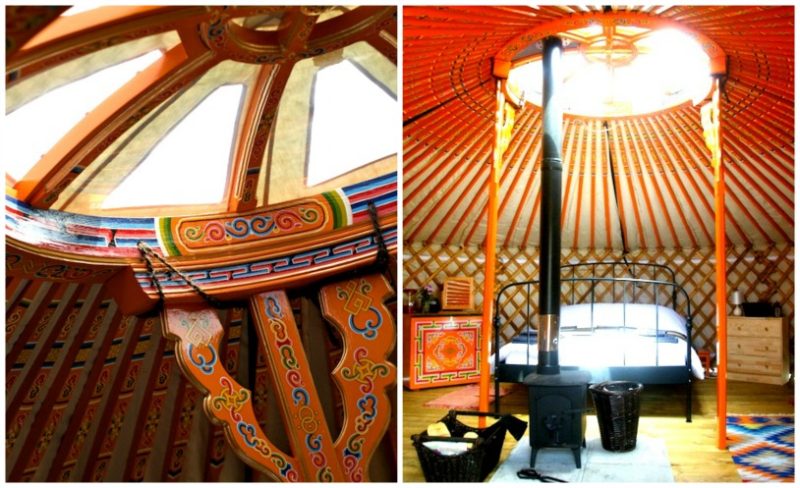 The yurts are traditional Mongolian yurts, made from lattice wall sections, tied together with horse hair. As well as a waterproof canvas, a layer of felt covers the roof poles, keeping the heat in. This means that even when it gets cold and wet, the small stove heats the yurt up very quickly. Pop in a log last thing at night and it will stay warm into the early hours. Rekindle the fire first thing in the morning, and doze as your abode warms up again. Gorgeous!

This was the scene that greeted us the next morning. Just 4 yurts in a field, in the middle of no-where. But with power showers and a proper cafetiere just round the corner. Now that has to be the ultimate in perfect paradox. 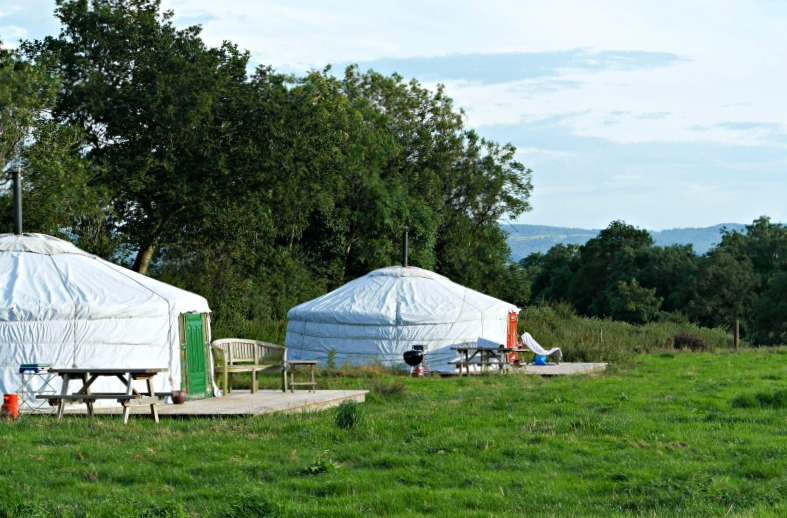 I’m not normally one for breakfast. Other than the perfect latte, I’m never in the mood for eating until mid-morning. But waking up every morning to fresh air and a good set-up for outdoor cooking soon changed that. Pancakes with bacon and maple syrup is absolutely what everyone should eat on their first morning in a yurt. It’s actually simpler than you’d imagine – I mixed the dry ingredients in a tupperware pot before we left home, nestling an egg into the flour for safekeeping. Break the egg, add the milk, pop the lid back on and shake. Et voilà! Perfect pancake batter. It went down so well that there were requests for a fry-up the following morning too – a suspicious look from the Bug soon evaporating once he bit into the odd idea that sausages were acceptable before lunch. 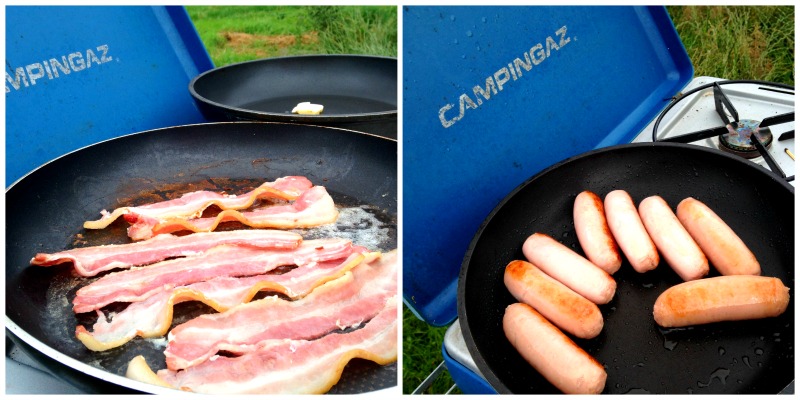 As well as the gas burner, we had a Weber BBQ, which gave us the perfect excuse for steak and red wine al fresco on a lovely Summer evening. Substitute red wine for Fanta, and steak for – well, steak actually, and we had the the ideal treat for the kids too. Although that didn’t prevent them from pestering as to when it might be time to light the communal firepit and start toasting marshmallows (top tip here – you need Haribo Chamallow for toasting. It’s the best). 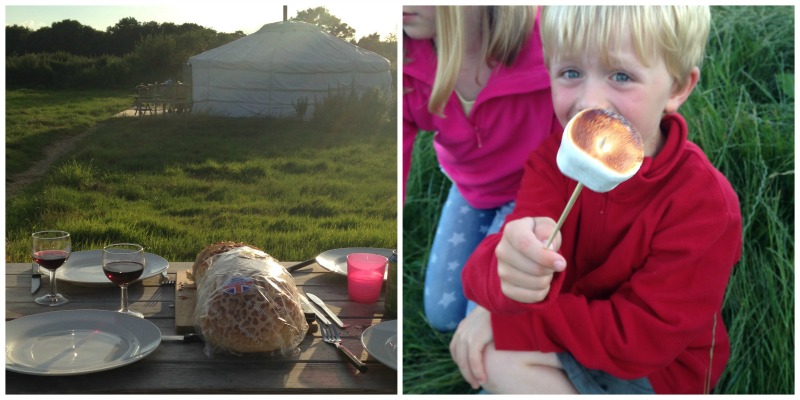 The Dairy Farm at Somerset Yurts 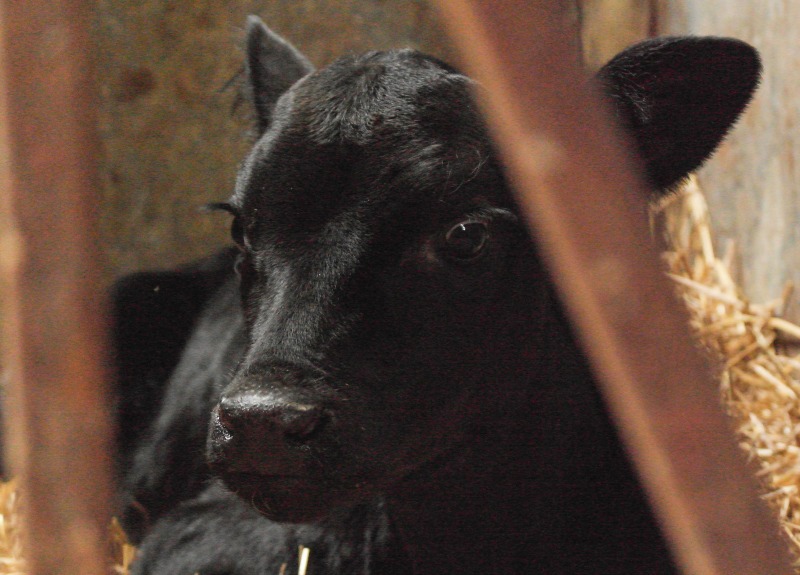 One of the nicest things about Somerset Yurts is how friendly the owners are. Mark and Emma came over with their young boys on our first afternoon to offer us all a tour of their working dairy, and we jumped at the chance. This four day old calf is probably the youngest animal we’ve ever been in contact with, and the children couldn’t get over how cute they all were. And how hungry! The milk from the farm’s cows all goes into making cheese and butter, the mention of which saw us seeking out local cheese for our next meal 🙂

What to do when it rains

We did have a lot of rain during our weekend, but whereas when we’re camping rain makes it all a bit miserable, with a yurt rain just adds to the excitement! For a start, it was the perfect excuse to send a small person off for more kindling from the woodshed so we could stoke up the fire: 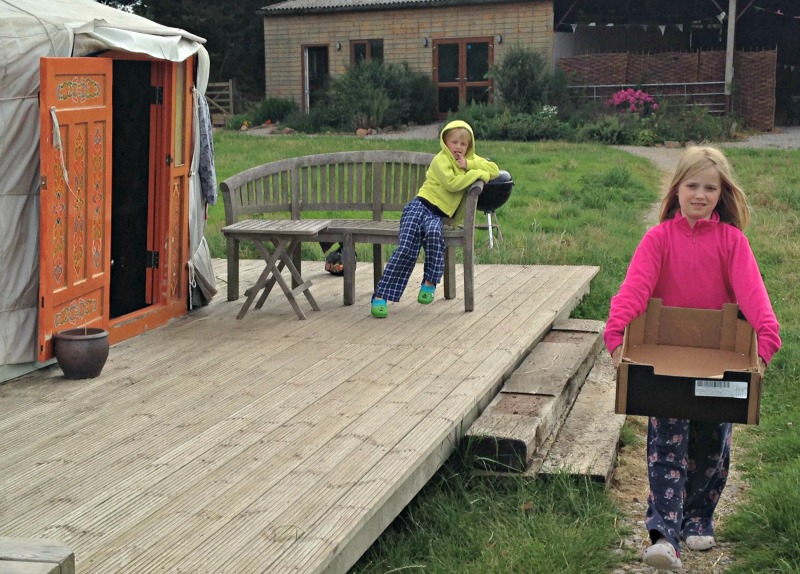 Child labour getting the teenage treatment…

The kitchen provided Monopoly, and playing cards, so it was time for the children to learn Rummy – have you ever witnessed the trouncing of all the adults in a card game by a 6 year old? I’m so never taking him to Las Vegas! (NB: passing a casino on Edgeware Road yesterday caused this utterance from the back: “Ooh a casino – I love those!”)???

And when we all decided we needed a cup of tea and hot chocolate, the best place was back at the kitchen table, where there was ample distraction for adult and child alike. 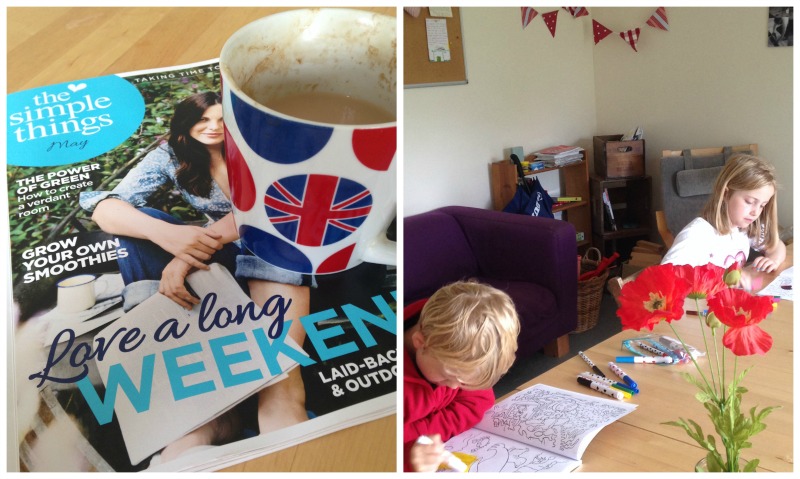 Days out from Somerset Yurts 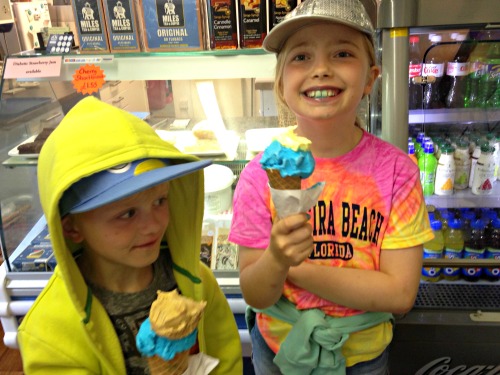 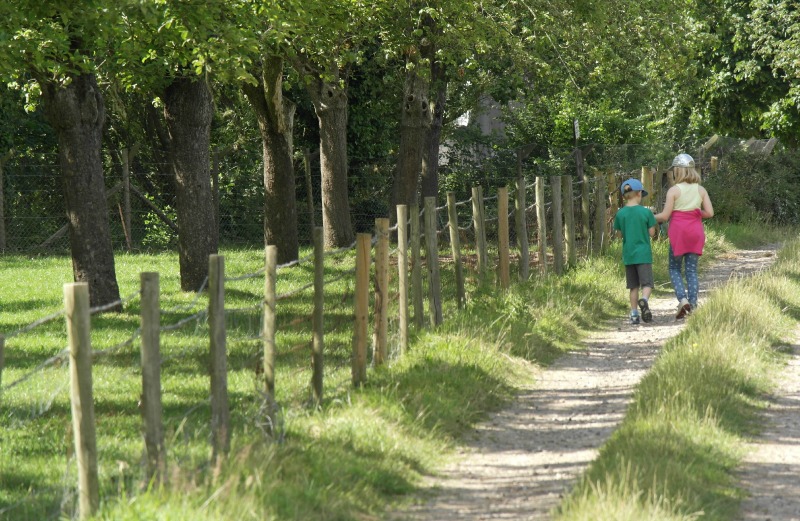 As we began our packing on the last day, faces fell and reality dawned. The weather was improving, the forecast looked good, and we hadn’t finished all the Chamallow. As Actually Daddy began to load the car, the children whispered inside the yurt. Then this happened:

So we stayed. Because when the sun shines in a peaceful field, the only thing you need to think about is the perfect marshmallow. 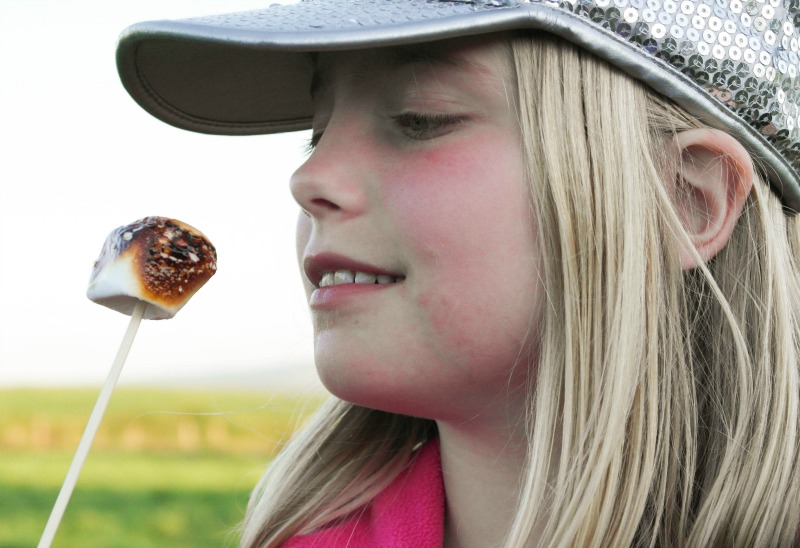 And another glass of cider… 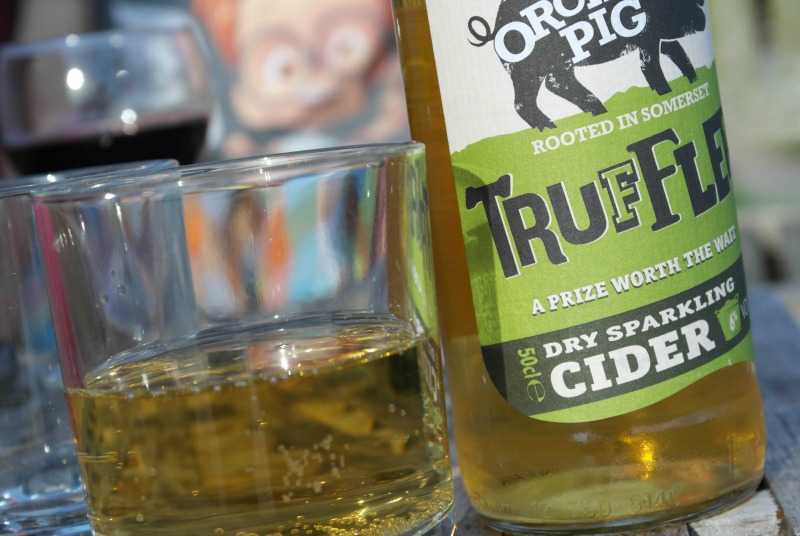 We were guests of Mark and Emma’s at Somerset Yurts for the purposes of this review. All opinion and editorial is our own.

Expressions #16: Over the moon!

38 thoughts on “The day they stayed off school: Somerset Yurts review”