I’m on a roll now with my meal planning. As well as my chalkboard ‘menu’ that means no one ever asks me (over and over and over) what’s for dinner, I’ve now made a loooong list of dishes that have worked, are easy and quick, and that everyone likes. So all I have to do is pick 5 that we haven’t had in the last fortnight, make sure they’re a balance of meat, fish and veg, and pop the quickest one into Frenetic Wednesday, and then allocate the rest depending on when the kids are free to do their stint. Jason picks up the other two, and Bob’s your Uncle!

It has honestly been so much less stressful feeding the family since I’ve had a meal plan routine. Let me know in the comments if you have any tips I can add.

Here’s how our family meal plan looks this week:

Monday was meant to be a chicken ham and leek pie. I always keep as stash of puff pastry blocks in the fridge so we can have a decent pie every now and then. But then Maddie and I did a trip to Aldi over the weekend and we picked up some of their ready made Lattice pies. At £2.99 for two I decided they were worth a punt. And they were, but I would ignore the Aldi cooking instructions which say to leave them in the foil tins they come in, and pop them onto a baking tray to cook. Ours had rather soggy bottoms! Fillings were good though.

I’m on a mission to make sure Evan leaves home one day knowing how to cook a few basic staple recipes, so this week I’m teaching him to make a lasagne. No recipe, just a basic ragu sauce with whatever additional veg we have in the fridge grated in (I’ve done that since they were kids and I needed to sneak veg into their diets without them noticing!), cheese sauce and lasagne, all layered up. We’ll probably serve this with some green beans.

It takes 10 minutes to grill salmon fillets, and 4 to soften some noodles, so that’s what we’re having for a speedy dinner on my super busy Wednesday. I like mine just brushed with oil and a bit of sea salt, Evan likes his with a dollop of sweet chilli sauce before it goes under the grill and Maddie has hers spread with pesto before I cook them. The beauty of individual fillets is that everyone can have exactly what they like with no extra effort.

This – would you believe? – is a recipe from an old Annabel Karmel book we bought when the kids were tiny! I think Maddie has been making these since she was around 6 or 7 years old, and has varied them up over the years from cod to tuna, which she prefers. It’s the basic flour then egg then breadcrumbs then frying pan method of breading, but there’s grated parmesan in the breadcrumbs. Totally delicious with fries and a salad, and I know she can make the whole thing on her own with much less mess than she did when she was 7! 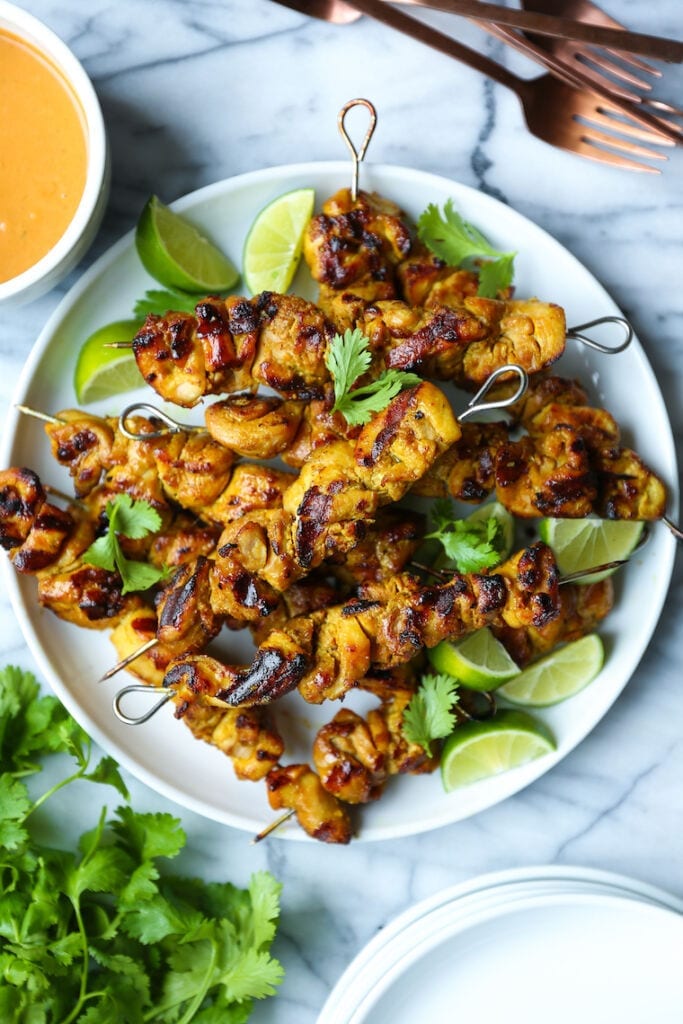 Jason is continuing his Southeast Asian culinary adventure with a chicken satay recipe with peanut sauce from Damn Delicious. We’re shaking this one up too, but mostly because I can’t justify buying smooth peanut butter from one recipe when no one likes it on toast. So we’re having cruncy! 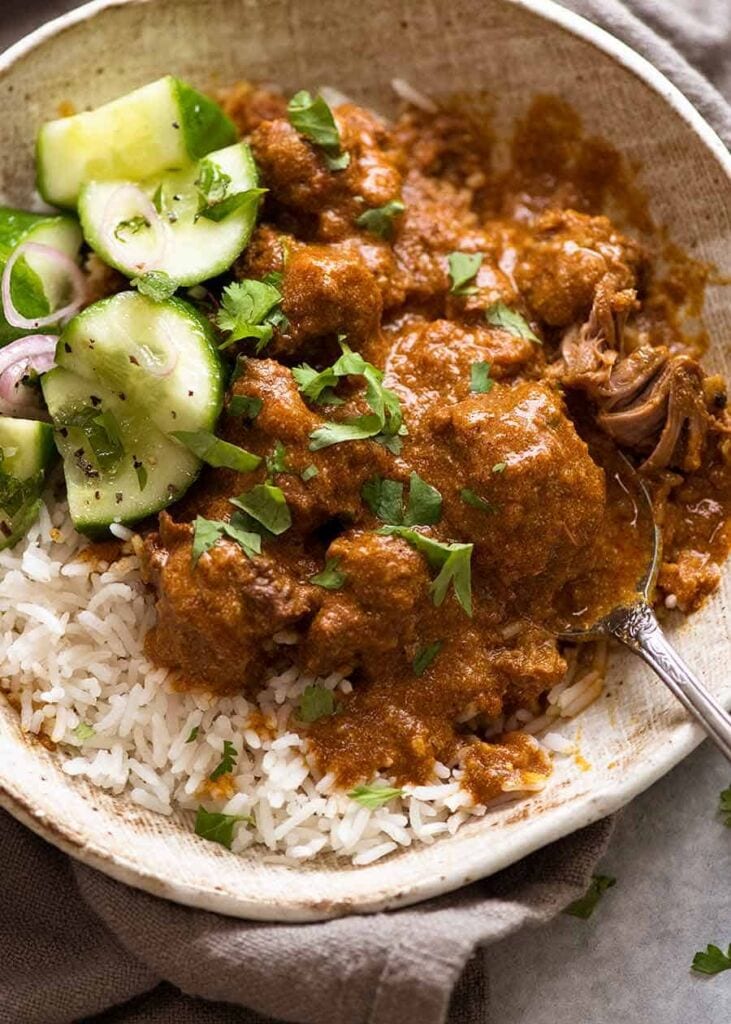 And for Saturday night (which shall henceforth be known as Curry Night – as long as Jason’s cooking!) we’re having Lamb Rogan Josh. And I’ll be having a glass of wine and shutting myself in the living room while he cooks! 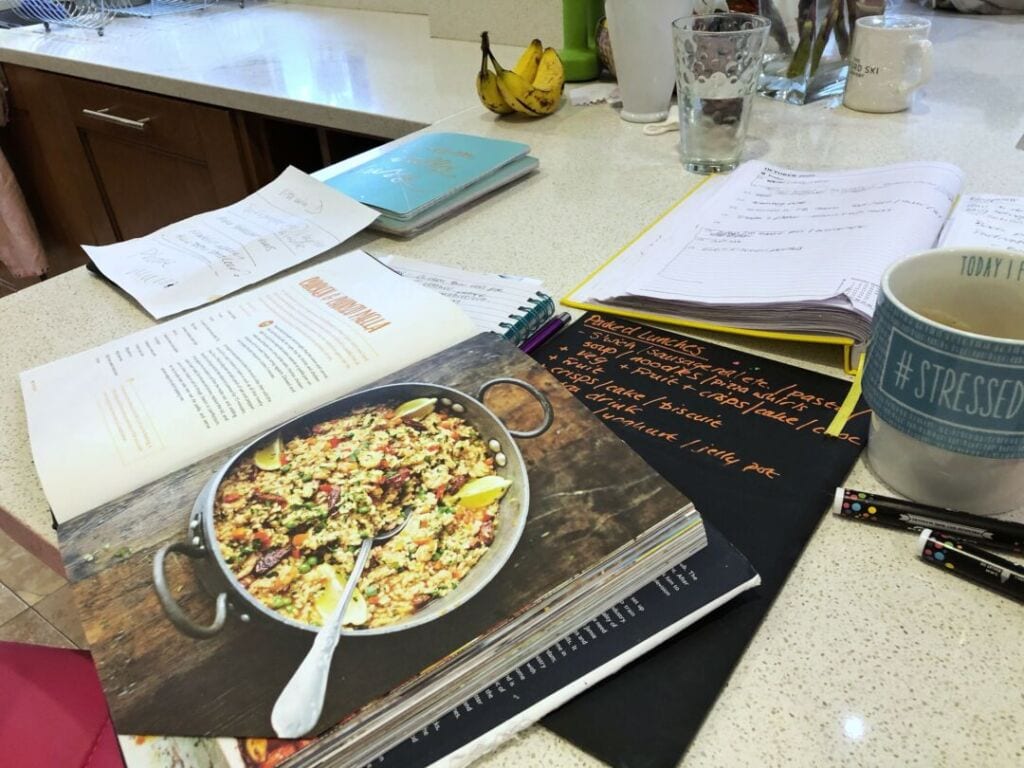 I’m a bit bored with roast. I know it’s awful to admit that, and I do still want the ritual of a proper Sunday lunch, with all of us round the table, but I need a break from meat and roast potatoes. Does anyone else get that? I’d love to know what you do as an alternative Sunday lunch if so. Anyway, when I realised that Maddie is away this Sunday doing her Bronze Duke of Edinburgh award I knew it was the one opportunity to do a seafood paella. She’s not a fan of prawns, and Evan loves them, so this is his chance – I’m looking forward to this as a change. It’s a Jamie Oliver chicken paella recipe, I’ve just subbed the chicken for some shell-on raw tiger prawns. Yum!

I think Saturday will be a combination of whatever we have in the fridge with a pot of houmous, and then Sunday tea will be stuffed jacket potato wedges. I bake potatoes, scoop out and mash them, mix in cheese and crisped up bacon, then stuff it all back into the skins and bake them again. If I’m feeling like the extra effort I snip each half into two wedges before I bake them again, to make little crispy potato boats. They’re a huge family favourite! 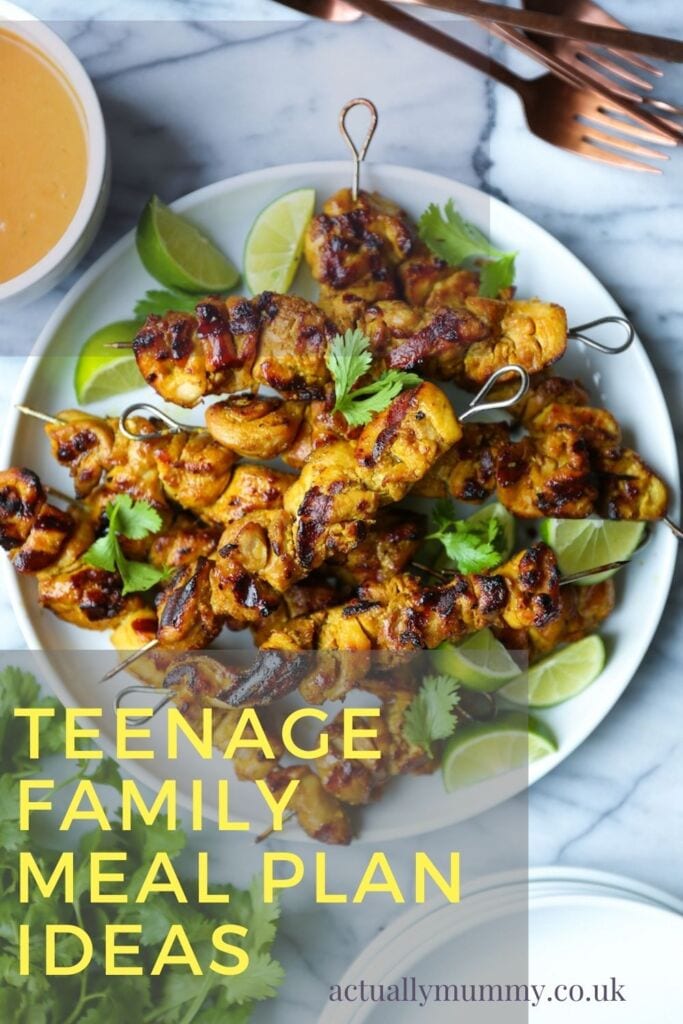 Teenage Kicks: Coping With a Stammer in Your Teens