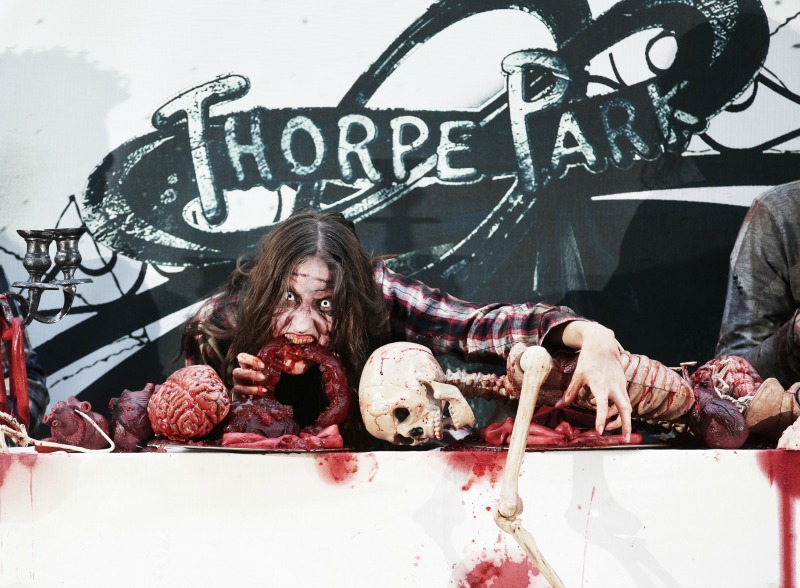 As Thorpe Park ambassadors this year we get to go to some special events, as well as having annual passes to the park. It’s been fun over the summer visiting with the kids and their friends. But when we were invited to do a Fright Night review of Thorpe Park’s Halloween events I knew my kids wouldn’t be up for it. Not because it’s not good, but because it’s probably too good. You’ll see what I mean, if you read on. Not surprisingly, when I asked around, there were plenty of offers to take our place. And so it was that Afra, who blogs at Mad Mum of 7, paid a visit to Thorpe Park with the braver members of her family. Here’s what she had to say:

The first question I had when I got the invite was “How scary is Thorpe Park Fright Night?” Am I alone in wondering what I would do in the event of a Zombie apocalypse? I’m not saying I lie awake at night actually worrying about it, but with the rise in movies and TV series like the Walking Dead it makes you think. Attending Thorpe Park’s Fright Nights proved I really would not fare well.

If I am honest I think I would be one of the first to fall as hiding under the bed doesn’t seem to be the best protection against the undead. Turns out I am terrified of Zombies – the all too realistic walking dead at Thorpe Park frankly scared me witless!

However my teenage daughter and my husband who came with me to the launch of the venue’s annual scare-fest seemed to relish the chance to take on blood soaked walkers and chain saw and machete-wielding nut-jobs. They literally could not wait to try out the five live action mazes including two brand new for 2017 inspired by The Walking Dead. Add to that the attraction of riding stomach flipping ‘coasters including Swarm and Saw IN THE DARK and the two of them were as excited as two vultures who have spotted fresh roadkill. 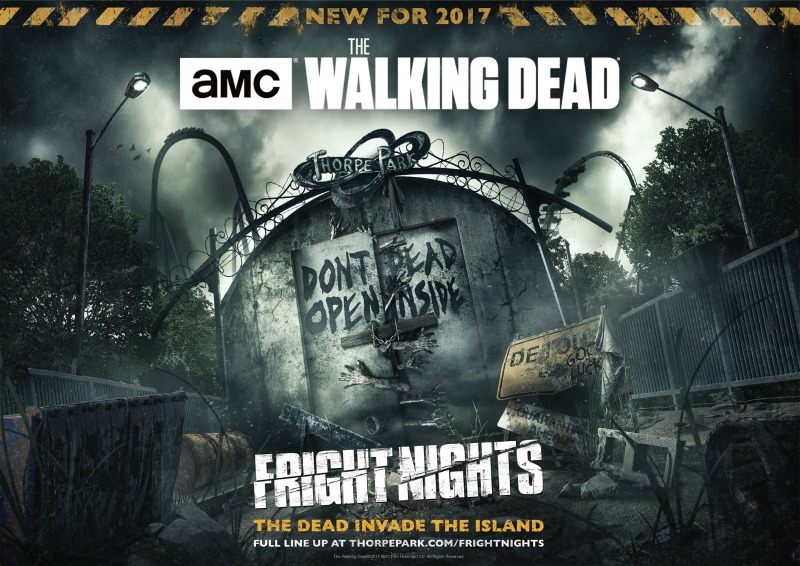 What’s the best age for Fright Night at Thorpe Park?

They were not alone. Fright Nights are immensely popular with thrill seekers of all ages. At the media launch event we spotted glam reality TV celebs mingling with serious cosplay fans, all keen to enter the mazes for the fright of their life. The age limit for Thorpe Park’s Fright is officially 13, but they’re very clear that many younger teenagers may struggle to cope.

Now, Thorpe Park have been very clever. The theme park has a wide range of attractions designed to generate plenty of adrenalin, no matter what scares you. Physical rides like the impressive array of world-class roller coasters are heart-pumpingly exciting enough for me, and I was literally terrified by the eerily realistic virtual reality ride, Derren Brown’s Ghost Train.

Before our visit I thought five mazes was overkill. (See what I did there?) But I was wrong. While I hid in one of the park’s many (zombie-free) restaurants enjoying excellent food and a drink or two, my husband and our 16-year-old daughter went off to explore. They survived dark pathway encounters with roaming un-dead and other scary characters only to find that what waited in the mazes was……

Well I’m not going to tell you am I? That would spoil the fun!

Suffice to say, it turns out that each maze is subtly different, so if being surprised by an unexpected ghoul just makes you laugh, move along to the next maze where maybe a disorienting encounter with a clown will make your heart pound more. The new mazes are called Sanctum, and Living Nightmare, both inspired by The Walking Dead. Which, as an aside, I can’t even watch from the safety of my own sofa. Not even with a cushion over my face!

In Living Nightmare you join other survivors at the mercy of the terrifying Negan. Lucille is coming. Choose your path and decide your fate. Follow in the footsteps of other survivors in Sanctum where all is not what it seems. Head through the compound towards the refuge of sanctuary if you can avoid being captured by the roaming walkers.

Do you fancy experiencing all this frightening fun yourself? Tickets are now on sale starting at £32.99 per person (you get a significant discount if you are an annual pass holder; please check the Thorpe Park website for up to date prices in each season). It’s worth spending some time looking at the options as there are also savings for group bookings plus some extra special VIP and behind the scenes experiences on offer for real fans of these Fright Nights events.

One final warning. You might think you know Thorpe Park but- the island changes after dark…

Why I Used a Sleep Positioner for my Baby