Well it’s week 3 and I’m still going – just! There was a moment when Mummy thought we were going to have to use the reserve pictures and theme a post around them, but we miraculously smashed a bottle of dessert sauce which has already fuelled debate in the #satcap community over horror scenes in our kitchen!

This week, as we have done some (admittedly random) crafting, I am also linking this post up to Red Ted Art’s Kids Crafts.

Anyway, here it is (albeit late, on a Monday – are we going to pull this off?): 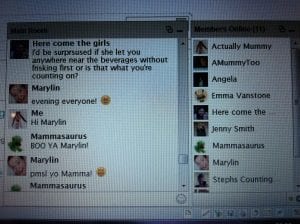 The week got off to a sinister start when Mummy discovered that the Love All Blogs community site that she works on had aquired a chat facility. And remembered several hours later that she hadn’t yet done a 366 picture… Now she hasn’t even got time to blog! 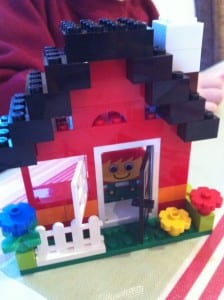 Things looked up when, after several nights of worrying, Mummy finally woke up and remembered where she had hidden the Christmas presents given to us in November by our very organised friends, J and P. Thanks girls!

Ever the Lego fan, the Bug has never been able to attempt a model by himself. His latest birthday wish – the Death Star – is unachievable not only due to age and brain power, but also due to lack of funds. Mummy says if Lego would like to test it on a middle-aged mum she is more than willing. This, he completed by himself 🙂 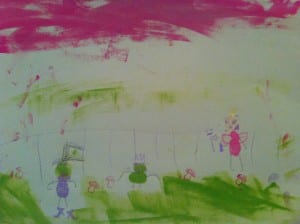 Having taught the Bug all I know about Lego, I had a go with my own belated Christmas gift, a fairy finger printing art set. Really fun way to make pictures with actual finger prints and stamps for the extra bits like boots and wings. I also discovered that a great way to get the ink of your fingers is to make a sunset. And a lawn! 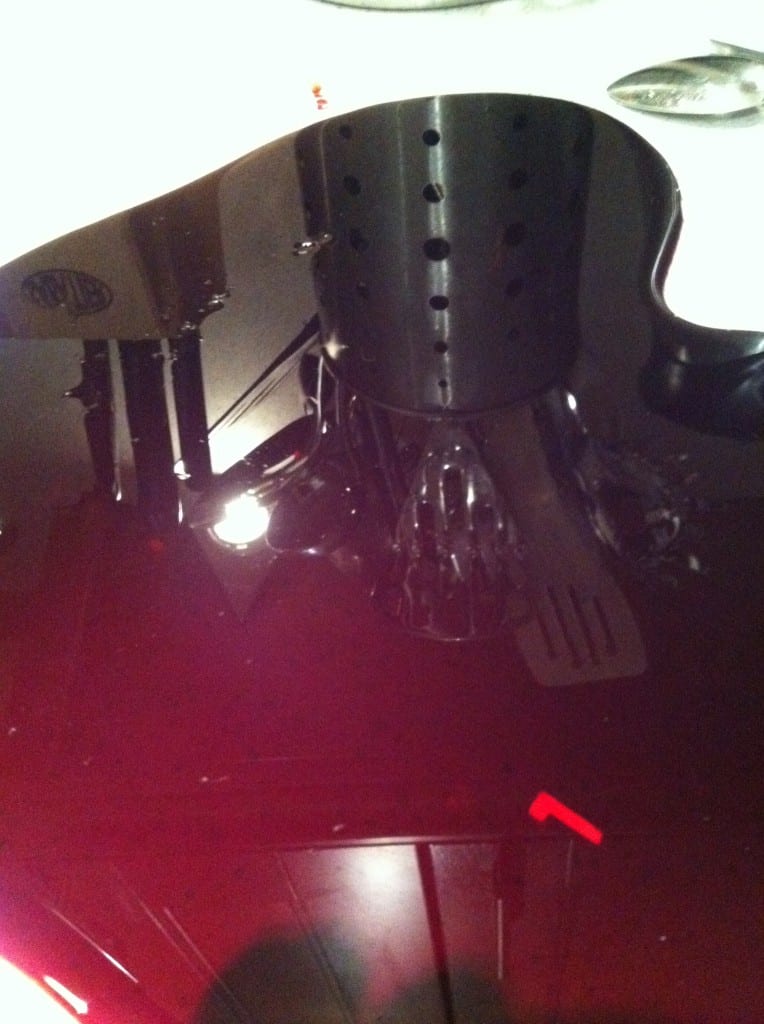 A lovely tea time today. We had ice-cream. We usually ask for chocolate cracking sauce, and popping candy, but today we wanted coloured sprinkles. They were at the back of the cupboard. Behind the jar of mulled wine pouring sauce….

Following the square-words and subsequent charges (I am the doyenne of the swear-box), Mummy went to clear up the mess. Luckily, before she did, she noticed how much it looked like fake blood, and how good it is at creating a reflection! 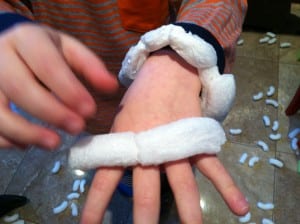 Daddy got a parcel this morning and whilst Mummy was out of earshot, he promised to let us have a ‘throw it in the air’ fun session after breakfast with the polystyrene. Big mistake. However, it wasn’t all bad, because we figured out that if you lick it, it sticks together and you can craft with it! Probably better to buy the Maize Craft kits though 😉 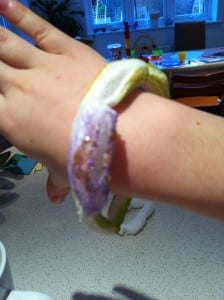 Fast forward a day and once all the bits of packaging were picked up and recycled, I discovered that not only have our creations survived to annoy Mummy for another day (she’s a neat freak, you know), but that if you pain them with acrylic paint (leftover from the Bug’s dino project – see last week), you actually get passable jewellery! Come on Mummy – crafting is ok really!

We were invited by Cadbury to witness the opening of Joyville ‘a magical place where joy is oozed into Cadbury Dairy Milk Chocolate. A photo simply wasn’t going to do the chocolate waterfall justice, so here is another video:


And the day got better, when we came home with the biggest chocolate bar and the smallest camera I’ve ever seen!!

Just got to eat it now!

Col Us: Wot so Funee?

Around the World in 80 Words