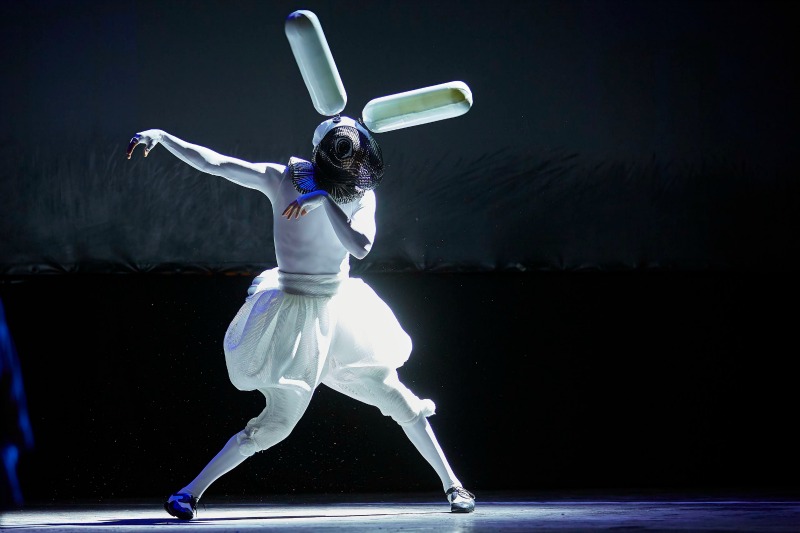 “I totally, utterly hate being me!”

Not something we’ve heard yet here, but at 11, I’m aware that this statement is a possible assertion for my daughter at some point in the next few years. Just before Christmas we went together to see Wonder.land at the National Theatre, to discover what might be lurking round the corner of her teenage years.

The first thing to say about Damon Albarn’s musical adaptation of the Lewis Carroll classic, is that it’s not suitable for children under the age of 10. It says so on the website, and it’s true, not just for the mentions of stuff you wouldn’t want your younger child knowing about yet, but for the levels of maturity needed to understand some of the concepts and thinking behind them. GG has quite a mature head on her shoulders, and responds sensibly when the ‘snigger factor’ comes into play, even watching Love Actually without totally freaking out (though she did hide behind a cushion during the body double scenes). She has heard about drugs, sex, and cyberbullying, and is well aware of how social media can be used inappropriately by some. So I had no qualms about taking her to see Wonder.land, and she loved it.

I often hear parents of teens – especially boys – complaining that their children no longer enjoy musicals, and if that’s you, Wonder.land might be the game changer. Yes, it’s a musical, but the music is ancillary to the story, and the big, bold and colourful that you’d expect of a musical is more tongue-in-cheek than its traditional West End counterparts.

Aly is a normal girl, going through normal teenage stuff: her parents’ relationship is on the rocks, she has a demanding younger brother, and she’s not part of the popular gang at school. Her mother nags her for being constantly engaged with her smartphone, but it’s here that she finds solace in the form of an online app, where the other gamers in her circle are all offloading their own insecurities. Together, they form a kind of virtual support group for misfits, and realise what they all have to offer.

Through her avatar, Aly gradually builds confidence in herself, until an equally insecure but angry head teacher confiscates her phone, and takes over her online persona, wreaking havoc on everyone’s emotions.

On the train into London I had read Henry Hitchings’ review of Wonder.land in the Evening Standard. He didn’t like it. He began:

“On the posters for this deranged musical… there’s a magenta Cheshire cat that looks as if it has just consumed a cartload of amphetamines.”

It’s true, and my daughter and I both loved the brash neon stereotypes of the show. It’s a visual circus that I loved for its irony, and that she enjoyed simply for the spectacle. Henry didn’t like the predictability of the show’s message – that self-acceptance is more important than fleeting popularity with inconsequential individuals. As a parent, I wholeheartedly embrace that concept for my children. Isn’t it the prerequisite of any satisfactory film too – a happier ending than beginning?

As we travelled home late that night, my almost-teen cautioned:

“You have to behave nicely online, just as you do in real life. You never know when it might backfire on you, do you?”

We were given review tickets to Wonder.land. All editorial and opinion is our own.

1 thought on “Theatre: A Curiouser Alice in Wonderland for teenagers”