I heard a muffled protest this morning evanescing from Mummy’s room. Apparently the Bug had finished his new book, got up, dressed for school, and was itching to do a book review. Go figure. I snuck out to get my confiscated Kindle, and left them to it. 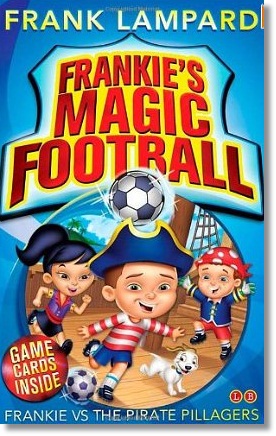 Being honest, I’d heard Mummy say that she wasn’t going to bother writing about Frankie’s Magic Football. I could even tell you what she was thinking: it’s written by a footballer, how is that going to be any good? Plus the Bug is not really a fan of his footie boots, preferring to stay warm and dry rather than chase a ball in the mud. But my brother was excited, and insistent, and that’s unusual for him with a book. He likes books, he’s just not all that bothered. So when he piled into her room full of beans about finishing his new book, she went with it:

When Frankie wins a leathery old football from a mysterious stall at the fair, little does he know that he’s been entered into a fantastic fantasy league – leaping from one adventure to the next with his best friends and team mates Charlie, Louise and faithful dog Max.

The Bug is a good reader, but his writing needs work. I can relate to this, having struggled to apply myself to creative writing in Year 2. One piece of advice Mummy was given to help me access more creative language in my writing, was to question me about books I had read, and ask me to retell the stories. You see I was very good at decoding the words, but the stories, the language, the complexities weren’t sticking around in any meaningful way. We worked on this and my current Year 4 teacher has declared me an interesting writer of funny and engaging stories. So when my brother shows an interest in a book, it’s a book worth showing an interest in as an adult.

Actually, she had to admit to being more impressed than she expected. A despiser of Rainbow Fairies, my Mum is grudgingly aware of the fact that that’s how I cut my reading alone teeth. And I now speed read 2 books a day on my Kindle and can write a mean narrative myself if I put my mind to it. Frankie’s Magic Football is kind of a Rainbow Fairies for boys who don’t mind a bit of football, and if the Bug is reading, then that’s a good thing.

Frank Lampard gets extra brownie points from Mummy for having teamed up this year with the Summer Reading Challenge, which aims to motivate kids to a love of reading. Maybe she’ll pay a bit more attention to those footballers from now on…

Disclosure: Frankie’s Magic Football is a series of books which takes footie mad friends on various adventures. We were given the first in the series – Frankie versus the Pirate Pillagers – for the purposes of review.

Why I MUST take my family skiing! #MarkWarnerMum