Olympic Stadium and Westfields: an amazing day out!

Last Sunday we were treated to a day out at the first ever event at the Olympic Stadium in Stratford, next to the Westfields shopping centre. The Olympic Gold Challenge event was run for schools who had taken part in the Gold Challenge, sending pupils and teachers to run on the track and join a parade. The Olympics organisers benefitted from a practice run at the opening ceremony parade, and the children got a unique opportunity to say they won a race on the Olympic track!

I was watching from only 18 rows back but I have to say that, even from the cheap seats we thought wouldn’t be worth the £20 asking price when the tickets first went out, the view would be great! 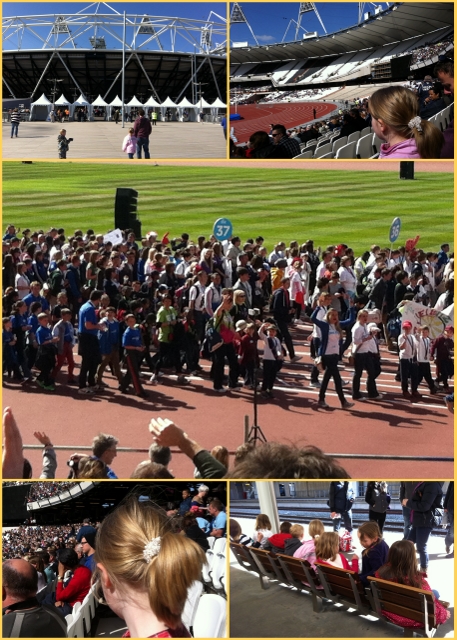 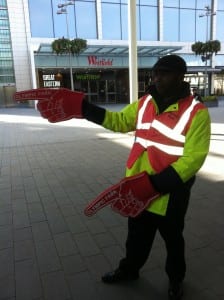 From start to finish we found the event incredibly well-organised, so as a dry run for the actual Olympics it was a complete success. No signs outside Stratford International to the stadium though, so we asked this guy in the “salmon” jacket (not pink, he informed us).

There were dozens just like him marshalling us to the check points, which resembled airport security. Mummy was impressed and decided it would be safer for us to attend the Olympics than to go to the local park!

The stadia themselves (yes, there are more than one) are pretty remarkable (although we were stopped from photographing them at various points “in case of people jams”). As you would imagine, everything is clean and modern, including the giant “helter-skelter.” We couldn’t work out what it was for until Mummy asked a very cheerful marshall of about 18.

“Well, it’s a structure, innit, by some artist, yeah? You can climb to the top and see the view. And when the Olympic flame arrives the runner takes it up to the top and it’s a beacon, innit.”

What he lacked in grammar and descriptive style, he more than made up for in manners, enthusiasm and knowledge, and we found all the marshalls to be friendly and helpful.

Being a cynic, Mummy would say that the Westfield shopping centre is stragegically placed between the station and the stadium so that you just have to walk past the beautiful shops (Prada included). Daddy was more focused on the snazzy restaurants and bars, making a mental note to try some freshly grilled kebabs and beers at mexican Cabana.

I get bored on trains, but I have to say that the brand new trains that go from St Pancras to Stratford International are jazzy and fast. Shame the same couldn’t be said for the journey home on First Capital Connect – I had plenty of time to get counted to three along with all my friends – tired and jolly as we were!

I am linking my post today to Mum of One’s I spy, because there is something in here beginning with R! 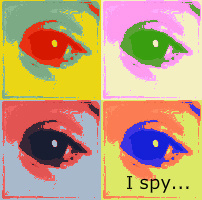 At Peace: The Photo Gallery

7 thoughts on “Olympic Stadium and Westfields: an amazing day out!”